The shoulder blades or scapulae have muscles that extend to the neck, thoracic spine, ribs and shoulder.  The shoulder blades, therefore, can influence these other regions. Having control/mobility over the scapula would thus be a potential area to work on if you are having problems in these other areas.

I often have my athletes and my desk athlete’s perform scapular circles if they have any problems in these regions. They are easy to do and can be done anywhere.

Shoulder blade circles/scapular circles (CARs) can and should be performed with the arms in any position.

I often start my athletes off with their hands resting on their laps. This tends to be the easiest way to start. As they get more accustom to controlling the movement of the shoulder blade the arm can be placed in different positions.

Take about 30 to 60 seconds to complete one circle.

A number of years ago i wrote a post looking into the research of whether or not there is any harm in cracking your knuckles.  An update on the subject is needed since knowledge can change over 6 years.

Chronic Cracking of your Knuckles and Arthritis

There isn’t much more research in chronic knuckle cracking and arthritis since I last posted. Two new papers were found during my search on this topic.

The Consequences of Habitual Knuckle Cracking (1975)

In this study the authors sent out questionnaires to 319 participants. The questionnaires asked which fingers were cracked, how frequently, for how many years they cracked their knuckles, if there were any other risk factors for osteoarthritis and if they worked in manual labour for over 5 years. They received 215 surveys. Based on these questionnaires they determined there were no differences between controls and those with osteoarthritis based on number of years they cracked their knuckles, the frequency of cracking or working manual labour. They concluded, that there is no association between knuckle cracking and the prevalence of osteoarthritis of the hand.

Download the in depth summary  on knuckle cracking from the link below.

Dr Notley – Does Cracking your Knuckles Lead to Arthritis 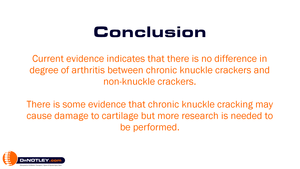 The evidence hasn’t changed much. Currently there is no difference in the degree of arthritis and being a chronic knuckle cracker. Cartilage damage could be occurring in those who chronically crack their knuckles but more research is needed.

Here is a response from the Evidence Based Chiropractor regarding Joe Rogan’s negative experience with Chiropractic care.

Conservative care is the first way to go when it comes to disc herniations:

A patient may be considered a candidate for spinal surgery if, after an adequate course of conservative care: